The automobile sector has increased its advertising spend across traditional mediums including television, print and radio according to the advertising expenditure data released by AdEx India, a division of TAM Media Research. Ad volumes of cars on TV, print and radio increased significantly by 17%, 15% and 7% respectively between January-March 2019 as against January-March 2018.

The study further reveals that TV topped the charts as it captured 58% share in terms of ad insertions followed by radio at 37% and print at 5%. 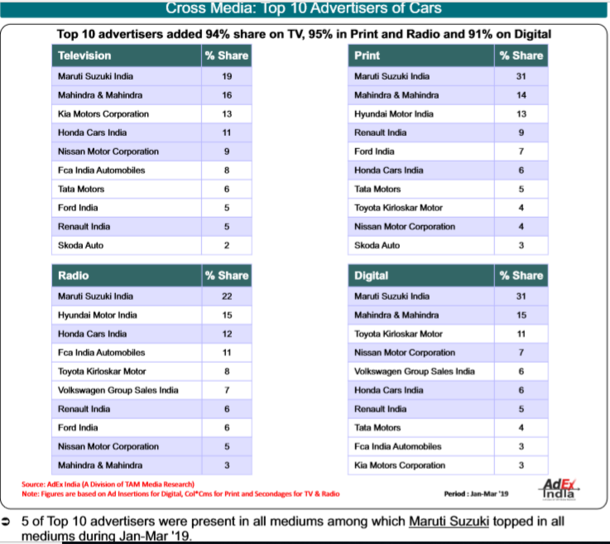 When it came to promotions of the category, among sales promotions, multiple promotion captured a lion’s share with 72% followed by discount promotion with 15% share. Among new brands on radio, three brands such as Hyundai Santro, Hyundai Xcent Prime and Honda Civic, which were re-launched brands between January – March, 2019, advertised the most.

Moreover, news bulletins turned out to be the most preferred genre of programme on TV, as it captured 32% share followed by feature films with 22% share. 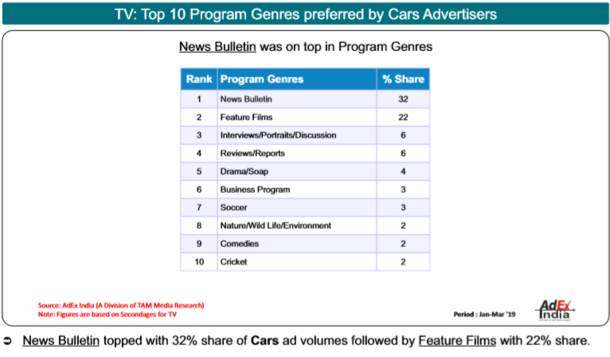 In the print category, North Zone topped as it contributed to 34% of ad spend. New Delhi topped not only in North Zone but also in overall India between January-March 2019. In case of radio, Maharashtra walked away with the highest spend. The state was on top with 19% share of category advertising on Radio, followed by Gujarat with 18% share.